One of my favourite muskoxen photos from Zackenberg is on today's cover of the Scientific journal Current Biology. 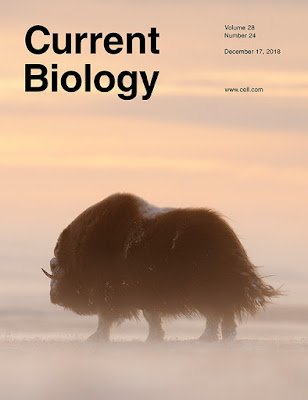 Inside this issue is a paper on muskox genetics titled "The Muskox lost a substantial part of its genetic diversity on its long road to Greenland" co-authored by some of my colleagues. I contributed to the study with field work - collecting samples from dead muskoxen - and another photo for one of the figures: 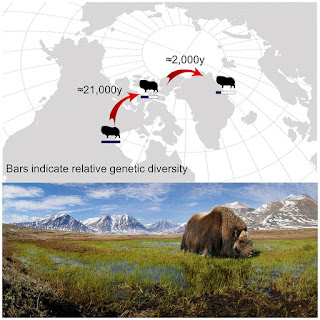 It always feels great to see ones images in print!

Fun to see one of my muskox photos from #Zackenberg on the cover of Sermitsiaq - Less fun not to have agreed or been asked if they could buy the usage of the image, so I sent them an invoice... I much prefer to agree on terms and prize before usage. 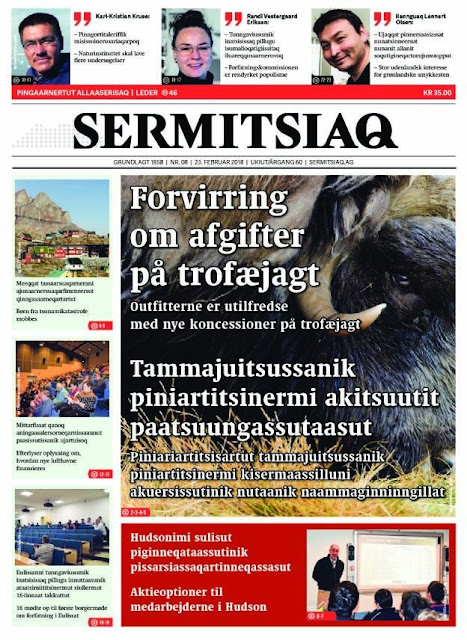 The latest issue of the nature photo magazine Natur&Foto brought an article of me on camera trapping in Greenland.

Here it is in an English version with a few additional images that did not make it into the printed version:
---

In Northeast Greeland, Danish and Norwegian trappers caught and shot arctic foxes and other animals like polar bears, wolves and muskoxen from 1908-1960. Since 2011, animals have again been caught at Zackenberg Research Station but now with camera traps. Camera traps enables close perspective on even potentially dangerous animals without disturbing. I see it as an opportunity at achieving images otherwise impossible or extremely demanding. Camera trapping requires a lot of both creative and technical thoughts and skills. A good portion of luck is needed too, but that goes for most kind of nature photography, I guess. 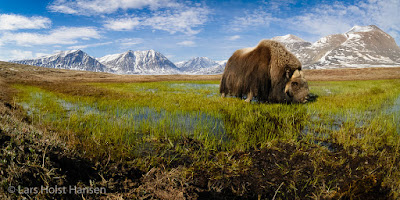 ▲ The animal in its environment
In 2011 I had bought an IR sensor and had plans on making a camera trap. As this musk ox bull and a few other started to hang out at this green lush vegetation in a little temporary pond, I was eager to capture it with a trap. I used an otherwise retired camera and chose a fish-eye lens to capture a lot of the mountains in the background and at the same time picture the animal relatively close. It was my first serious attempt with a camera trap and I was really happy with getting a result not only I was well satisfied with. The image got a nice placement in the mammal category in the Nordic Nature Photo Competition 2012 and the Greenlandic Postal Service chose to release a postal stamp with it in 2013.
Nikon D200, Nikkor 10.5/2.8, f/11, 1/400s, 200 ISO, Trailmaster TM-550 sensor. 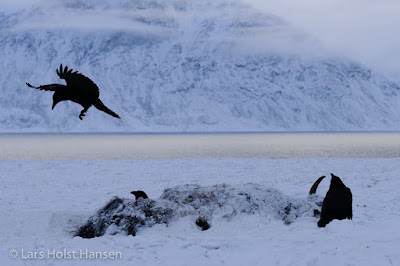 ▲ Musk ox carcass and ravens
Even as dead, muskoxen can be interesting subjects. I had seen this muskox bull alive a few days before relatively close to the research station, before I suddenly saw a few ravens flying over it and landing on it. The fresh carcass attracted ravens and arctic foxes and was an obvious place to set up a camera trap. This time it was a bit longer from the station, so I chose a lens with a protective filter as I could not save the equipment  fast in case of bad weather. The ravens flew off as soon as I was near but soon got used to the trap.
Nikon D300, Nikkor 50/1.4, f/4, 1/1250s, 200 ISO, Trailmaster TM-550 sensor. 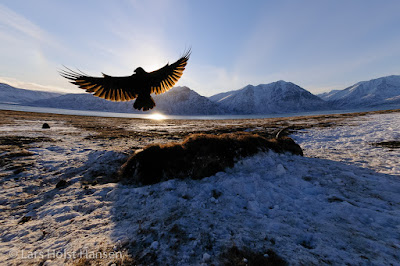 ▲ Flying Raven at the carcass
I was happy with the background the mountains on Clavering Island made up, but it was not really possible to see that it was a dead musk ox from this angle. I could have turned the carcass but I have strong pinciples in my nature photograpy on not staging anything, so I left it as it was.
Nikon D300, Nikkor 10.5/2.8, f/11, 1/640s, 200 ISO, Trailmaster TM-550 sensor. 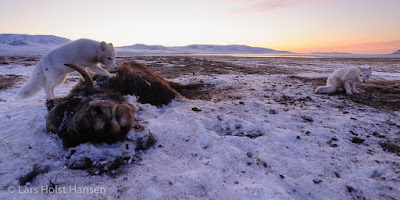 ▲ Arctic foxes at the carcass
Rather than turning the carcass, I tried alyternative angles. It was exiting to follow the slow break down of the carcass and I got some good images both with and without camera trap, as the foxes gradually got used to my prescence. As it was later in the season with less light, I chose to sacrifice my primary but less noisy camera for trap duty.
Nikon D700, Nikkor 17-35/2.8, 19mm, f/11, 13s, 3200 ISO, Trailmaster TM-550 sensor 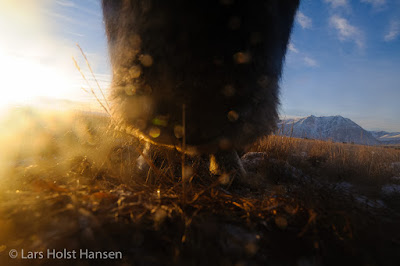 ▲ Curious
In 2012, I had brought with me a photo robot - a radio controlled mobile camera platform with wireless transmission of the vievfinder image meant for close-up images of muskoxen using wide angle lenses. The animals were afraid of it though, so I never did more than a single test run. In stead, the camera trap got on duty again. This time I had made a protective box and set it up in a fen area with lots of muskoxen. It was good to have the protective box, for several times the little tripod was turned over, when I went out to swap memory cards and batteries.
Nikon D700, Nikkor 17-35/2.8, 17mm, f/11, 1/500s, 800 ISO, Trailmaster TM-550 sensor. 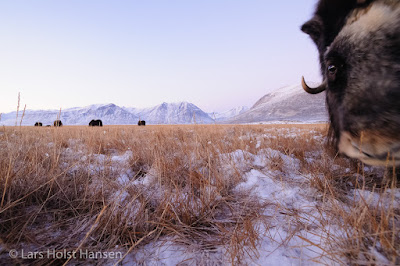 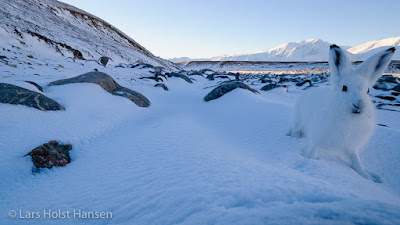 ▲ Surprised arctic hare
The trap was set up near the river where I had seen many fox tracks from the patrol route of an arctic fox. The fox stayed away but this hare came by. I have a whole series where it hardly moves so I guess it freezes in surprise by the sound of the camera shutter.
Nikon D700, Nikkor 17-35/2.8, 19mm, 1/160s, f/11, 200 ISO,  Trailmaster TM-550 sensor. 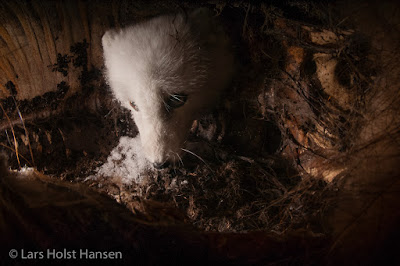 ▲ Inside the musk ox carcass
I had long imagined to place a camera trap inside a carcass as the foxes often start eating from within. In 2014, I got the chance as a fresh carcass was found near the research station. I cut a hole opposite the entrance made naturally by the foxes where I could fit a protective box with a spare domeport to fit a fish-eye lens. I also just got space for a wirelessly controlled flash in its own waterproof box in the cavity. The first images got spoiled as the focus had displaced. The carcass was really dry and no longer interesting, so all summer went and it was fall before a fox again put its head inside.
Nikon D300, Nikkor 10/2.8, f/18, 1/125s, 200 ISO, SB-800 Flash, PocketWizard Plus III tranceivers, Snapshot Sniper II sensor.

For camera trapping you need a sensor and release mechanism. I have until now used passive infrared sensors (PIR) which react to motion. You can also use so-called active sensors where a beam of light needs to be broken or even booby trap devices as strings or pressure sensitive switches. They enable more control of when the images are released but there is a risk that no images are taken. I personally do not use any form of attractants besides what is naturally available such as a carcass as I do not want to stage anything. Some animals can be attracted to the camera itself, however. External flashes are often used but I have not used them much in Northeast Greenland where the midnight sun shines more than 3 months every summer. It can be a good idea with a box to protect the camera against weather and not least the animals. The camera, I mostly set to aperture priority with auto ISO to cater for the widest range of lighting. A low solid tripod or homemade platform with a thread for a tripod head with quick release can be practical.


At www.camtraptions.com/category/interviews/ you can find interviews with some of the worlds' best camera trappers.
/ Lars Holst Hansen

Yesterday I had a go at making an animated GIF made with an image sequence. I used the free ImageJ multi platform and open source Java image processing and analysis program, utilizing the plugins StackReg and TurboReg. Without the registering or alignment the animation would be rather jumpy since I was handholding the camera and lens:

It is always great to see your images published and this week I had the pleasure twice.

The danish web media on science videnskab.dk is visiting Greenland at the moment. They are using a sequence from my Greenlandic postage stamp muskox turned into a nice gif animation.

Yesterday I saw the cover of the May issue of the scientific journal Arctic, Antarctic and Alpine Research with a photo of mine from Zackenberg: 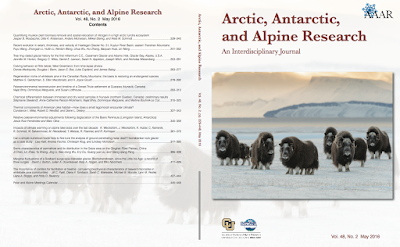 The reason for these muskoxen on the cover is this nice paper by my colleagues on biomass removal and spatial relocation of nitrogen by muskoxen.
/ Lars Holst Hansen

Three days ago, I placed a camera trap at a fresh musk ox carcass. The night after I placed the camera, we had a polar visiting the research station. Due to work and weather I was not able to check on it before although I knew the batteries would not last for three days. I hoped the polar bear would have found the carcass and that I could catch some photos of it there. When I came to the camera trap today, I found that the bear had indeed been there. The carcass was moved arround and so was the trap!
The bear had snapped the ball head socket and the small pelicase with the camera was lying 50m from where I placed it. When I picked it up it was heavy and I realised that it was full of snow. Back at the station I brushed off the camera and dried it up a bit. With a new battery, it worked fine. Unfortunately it had ran out of power before the bear came but I got some nice images of arctic foxes.
/ Lars Holst Hansen

Today, I am rounding 1000 days at Zackenberg Research Station. For the last eight years and a few months, Zackenberg has been a big part of my life, and I feel very privileged to have been able to spend so much time in what I consider the greatest little place on earth. I have met many wonderful people here and had some fantastic experiences with nature; most of them pleasant, many of them exiting and a few of them somewhat dangerous. Working and living for long periods in the world's largest national park is very special. What is going on in the outside world is no longer that interesting but the weather condition and the state of the nature certainly is; where the musk oxen are, how the foxes are doing, whether this year had more snow than previous years becomes hugely important. The senses are amplified and you live in "the now" and almost get a "personal" relation with the place. The more time you spend the stronger this relation grows. Some people may think it would be boring to spend so much time in such a moderately little place but every year brings new experiences; nature is wonderfully diverse and never the same.
/ Lars Holst Hansen 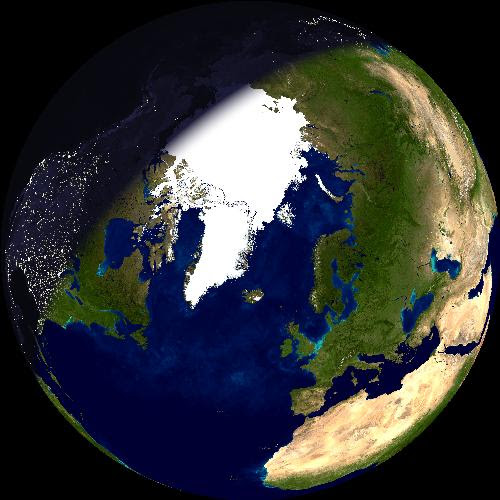